The CFA is always looking for new volunteers. Please contact the Brigade Secretary on This email address is being protected from spambots. You need JavaScript enabled to view it. or 0400 579 815

The Country Fire Authority (CFA) is represented in Violet Town and surrounds by the Violet Town Brigade, with the station located in Cowslip St. In addition, there is the Violet Town Group which includes the Koonda, Boho, Balmattum and Earlston Brigades. Here are pictures of the old and the new stations.

The Brigade is part of District 22 in Northern Country Fire District, which has its headquarters in Shepparton.

The Brigade is a fully volunteer station. In working with Violet Town and district communities to keep them safe, the Brigade responds to bush fires and structural fires, grass fires, traffic accidents, incidents involving hazardous materials, and other emergencies including trapped people and flood assistance. It also conducts fuel reduction burns.

In 2014, the Brigade and the Making Violet Town Safer Committee won a commendation for their Red Bucket Program and Know Your Neighbours project, a community safety and engagement project as part of the Resilient Australia Awards.

Living in the country brings dangers from grass and bushfires. Everyone needs to take personal responsibility for their fire preparedness. Here is a template for you and your family to complete before each fire season.

At the turn of the twentieth century, Violet Town was a town largely made up of wooden buildings. Fires in the town were usually disastrous as the Euroa Advertiserreported on 29 March 1901, page 3:

Being without the services of a fire brigade in the town it was useless attempting to save any of the buildings closely connected, and the principal endeavours were centred in preventing the spread of the fire to Mrs Sambell's, on the one side, and Mr Latimer's, on the other. Fortunately there was a gap between these places, otherwise nothing could have saved the entire street. … As it was, both places mentioned were smoking several times, and it was only by a free use of bags and water that the flames were kept off. The office of Mr Archer, solicitor, was partially destroyed, but was preserved from total destruction by the use of a hydrant and about a fifty foot length of hose, the property of the Water Trust, and which is the only apology for a fire brigade which the town possesses. 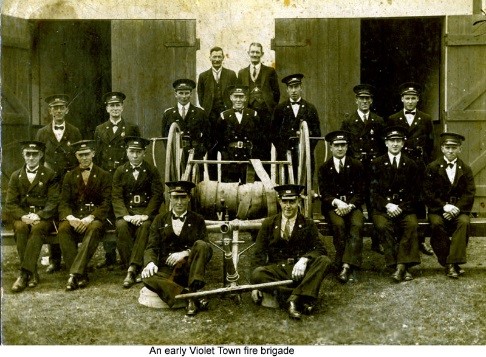 By early 1905, calls were made for the formation of a bush fire brigade but the idea was abandoned due to lack of interest.

Around 1910, a town brigade was formed and it was quick to ask the Council to insert fire plugs in various parts of the town mains so that water could be accessed more readily. 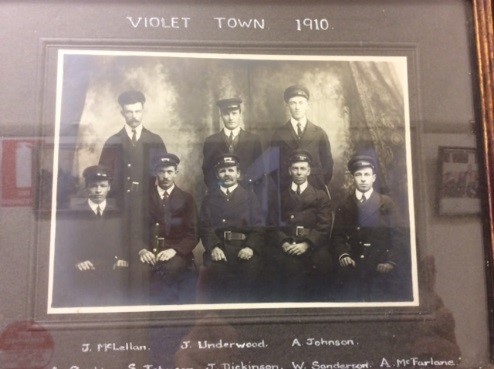 By World War 1, the Brigade was fully formed with an elected Captain. Many original members had previously served with the Euroa Fire Brigade.

In 1944 the Earlston, Boho, and Balmattum bush firebrigades formed themselves into a group and in 1945 this expanded to become the Violet Town Group.

The Fire Brigade had a central role in responding to and controlling the fires that resulted from the terrible Southern Aurora train accident in February 1969, just outside Violet Town. Nine people died and 117 were injured.

In 1995 the Violet Town Rural and Urban Brigades amalgamated to form one brigade.

This poem was penned by Tim Roberton whose property was threatened by the Boho fire at the end of Jan 2013. The "Red Steer" was the fire. The lines are cut for sense but also to be like grass fire fronts.

The poem is about the conflict between local CFA volunteers and professional fire-fighters which  developed into a major political conflagration that still smolders.

Tim sold it in pamphlet form raising about $100 for the Boho CFA.